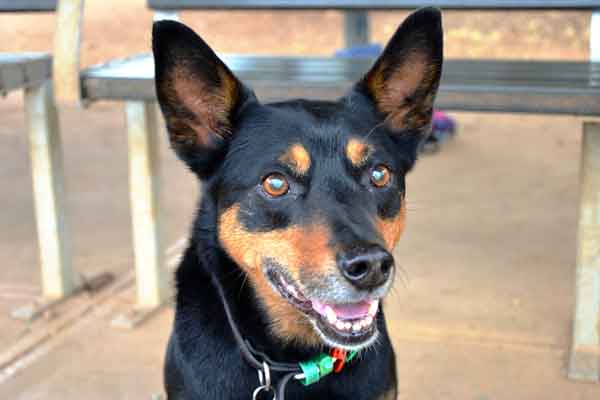 I want to tell you a story about what happened to me a long time ago. I was very young, still a puppy, really, and it was my first big muster. I’d worked a bit around the stock yards, but this was for real – out in the hill country, rounding up sheep with the master stockmen, and trying to keep up with the older and more experienced working dogs.

Like I said, I was still a puppy, so by the time we got back to camp and were fed, I was exhausted, so I curled up under the stars and went straight to sleep.

But then something woke me up. At first I thought I was dreaming, because the night sky was ablaze with a dazzling light. There seemed to be hundreds and hundreds of man-like creatures hovering above us. One of them spoke to the stockmen, and then they all started singing. The air was full of this beautiful sound, and then they all disappeared, and everything went quiet again.

The stockmen were all talking at once. I couldn’t understand what they were saying, but they were very excited, and I caught the word, ‘angels’. I thought this must be what these man-like beings were. After a bit, two of the stockmen, Dave and Jacko went and picked out a couple of lambs from the pen and put them in the back of the ute. Then they picked me up an put me in there with them. I didn’t know what was happening, but I suppose they decided that I could cope with a couple of dozy lambs. That was OK by me. I was proud to be entrusted with the responsibility, and so I fixed my stare on the lambs like I’d been taught to do, daring them to put a hoof wrong. But they were too sleepy for that, and so was I, come to think of it.

Anyway, we bumped down the track for a while, away from the hills, and eventually into the little town below. We stopped outside a pretty small, dilapidated barn. Dave and Jacko picked up a lamb each, but I was ordered to ‘Stay!’ I’d like to say I obeyed completely, but hang it all! I wanted to see what the fuss was about. (Like I said, I was still only a puppy). So I scrambled out of the ute and crept through the partly open door and into the barn. Inside were other animals besides our lambs, and I had to dodge a cow’s foot as she shifted sideways in her stall. There was a feed box in the middle of the room, and two other people as well as Dave and Jacko, who were kneeling in front of it. They had taken off their hats, and were looking at something in there. They had this soft, misty look on their faces, something I’d never seen before. These were a couple of tough blokes, so I wondered what was in there that was so special. I decided to take a look.

I stayed back in the shadows until they got up and went to talk to the other people, and then I sneaked up to the feed box, and stood up on my hind legs so I could see over the edge. There, in amongst the hay, was a baby, very tiny, with his eyes closed, just like mine were when I was first born. He looked so beautiful, and I could see why Dave and Jacko thought he was special. I thought he was asleep, but then he waved his little arms about and opened his eyes. He looked straight at me, as though he’d known me forever, and all I wanted to do was protect him, like I would with a new born lamb. Then he grabbed one of my ears. It didn’t hurt, but his hand was cold. ‘Well,’ I thought, ‘he hasn’t got fur like me, so of course he’ll be cold.’

Then I had a bright idea. If he didn’t have fur to keep him warm, I might be able to share mine with him. Dave and Jacko were too busy talking to notice me, so I hopped into the feed box, gave his forehead a lick and curled up next to him. It must have helped, because he fell asleep
straight away.

And I must have too, because the next thing I knew I was on Jacko’s lap in the front of the ute as we bumped back to camp. That was when I knew that they really had gone soft! I should have been in the back where working dogs belong. But I didn’t complain. I just snuggled down a bit more and went back to sleep.

Since then I’ve thought a lot about that night. I often wonder if the special baby would grow up to have his own mob of sheep. The way he’d looked at me, I reckon he’d know exactly what to with them. I wondered what it would be like to work with him, listening for his whistles and doing my best to follow his voice. Sometimes I might hitch a ride on the back of his quad bike and lean into his back with the wind and dust flying around us. I bet I’d learn a lot from him, and grow up to
be the best sheepdog ever!

And sometimes, on bright, moonlit nights, I would remember those angels, and lift my face to the moon and sing their song. ‘Arooooooo!’ * I’d sing; ‘Glory to God in the highest, and peace to all creatures on earth!’ *
Howl.