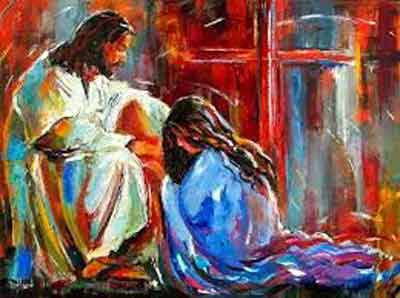 News on the streets was that Simon, the Pharisee, was about to hold a banquet. It was essential to make it known to one and all so that his generosity could be applauded, even though those invited would only be, of course, his friends and colleagues – no scruffy strangers here! The guest list included, to my surprise, Jesus, a young itinerant Rabbi. Well, I thought, as a Rabbi it stands to reason that he would be there, but he didn’t seem to be the type to consort easily with Simon’s ilk. I should know. I have known Simon and some of his friends intimately, you might say.

But I’m getting ahead of myself.

My story begins at the age of seven, and out on the streets of Jerusalem. With both parents dead and no brother, uncle or male relative to protect me, there was nowhere else to go. I somehow survived, along with other street urchins, begging and scrounging scraps of food, until one day, when I was about eleven, I was dragged into a dingy laneway and raped. For a long time I lay there, curled up, in the dirt. If I had felt dirty before, it was nothing compared to that moment. But when I eventually struggled to my feet, I found the rapist had tossed a couple of coins in my direction. I made up my mind at that moment that if this is what I was, I may as well exploit it for all it’s worth. So I set about learning all I could about the tricks of the trade from the older girls.

I saved enough money to buy cosmetics and perfume, and learned how to use my ‘assets’ to my best advantage. Eventually I grew from being a scrawny kid enduring grubby gropings in dingy alleys to a voluptuous woman, able to attract a more wealthy clientele. I was no longer on the streets, as I could now afford accomodation and more costly perfumes, the best of which was nard. I felt like a queen! I was free (although my occupation was not without its risks) to be my own woman. Men were simply clients, and I found, to my satisfaction, that exploitation could be a two way street. Love, or any emotional attachment for that matter, was out of the question. Love was not to be trusted, as I had learned from bitter experience. I told myself that I had no need for it, that I was much better off without it. But there was still something in me, a sort of hunger, that occasionally came to the surface. But I couldn’t afford to dwell on it.

It was a question of survival, you see.

Every so often somewhere on the busy streets of the city, I would come across this young Rabbi, Jesus – the one I mentioned before. He wasn’t just talking to his disciples, like other Rabbis, but to the people round about who would gather to listen. I found myself drawn into the crowd. It wasn’t so much his words that struck me. It was his whole demeanour. He smiled a lot, and laughed, and told stories that fired your imagination. It was as though he loved – genuinely loved, everyone he met. He wasn’t afraid to touch those who were deemed to be ‘unclean’, or ‘sinners’, like lepers and tax collectors, and sometimes I wondered if he would ever dare to touch me, a prostitute. And then I was there one day when he gathered children about him and proclaimed that the kingdom of heaven is made up of these little ones. That shook me. I thought of my own childhood, and my resolution never to be vulnerable, never to show anyone my pain. I found myself thinking, ‘If only you had been there for me when I was that age.’

When I got home I sat on my bed and tried to deal with the avalanche of emotions that raged through me. All my defences seemed to be crumbling. Here was a man who had succeeded in getting under my skin. Here was a man who managed to pinpoint my deepest longings, the ones I had buried so successfully for so long. Here was a man who seemed to know me inside out, in a way that no client ever could. They, I thought bitterly, were only out for one thing – their own pleasure. But I then had to admit that it was I who exploited their appetites as well, initially for my own survival, but then for my gain. I looked across to the jar of nard in the corner. Until now it had been a sign of success and independence, used to attract bees to my nectar. But now I saw it as perfume to disguise the stench of my grubby life.

I would like to say that I changed from that moment onwards, but the habits of a lifetime are very difficult to break, and I still had to make a living. Yet somehow I was continually drawn to this young Rabbi, and often against my better judgement found myself seeking him out, standing on the fringe of the crowd, hanging on every word. I would soak up his teaching, even though it would sometimes cut me to the heart, because he seemed, as I said, to know my very soul, and the kind of life I led. And the life I led began to pall. I no longer relished the idea of exploiting the appetites of these men, because it was apparent that my own hunger could never be satisfied that way, and I could no longer deny it.

And hungry I was – hungry for the love evident in the very life of this Rabbi. And it wasn’t sexual. Oh, he was physically attractive all right; about 30, fit and lean, good looking you might say, but this was not about sex. This was about life itself!

The turmoil continued until I knew I must do something about it. I could not continue as I was, doing what I did. I wanted this love that he offered quite freely, but I had grown to loath myself. So what could I offer him in return? How could I show him the depth of my hunger to be free of this insidious cycle of exploitation? And would his love be generous enough to accept me, or would he turn away once he really knew what I was?

But something had to be done, so that I didn’t have to just survive, but live a full life, free and clean. All these things occupied my thoughts one night as I paced the floor of my bedroom, unable to sleep. I felt so desperate that I began to cry. I looked over to the jar of nard and wanted to smash it and pour out its contents into the gutter. But it was then that I knew what I had to do, and the banquet at Simon’s house would be the place to do it.

If I had used the nard that to disguise the grubbiness of my life, then it needed to be used to expose that truth to the one whose love I had grown to trust. I would therefore pour it out onto this man and anoint his feet in humility and penitence. I knew my tears would flow freely, and that I must wipe them off with my loose hair – another symbol of my decadence. I did not know what the result would be, but it had to be done.

The following evening the doors of Simon’s house stood open, so that all and sundry could see the sumptuousness of his table. It was possible to linger and stare, but I had to go further. I had to enter the house. As I said before, I knew some of these men intimately, and they also knew me. I ran the gauntlet of their stares as I walked slowly past the reclining figures until I came to Jesus. I then knelt, anointed his feet with nard and my tears, and dried them with my hair. The shock was palpable. I could hear the whispering at the top table as Simon scorned not me, but Jesus. “If he had really been a prophet he would have known what kind of woman this was.” I was used to this kind of talk, but Jesus…..? It gave me hope. If Jesus was experiencing the kind of slander I dealt with on a daily basis, then maybe he would understand my situation.

And I was right. Jesus said, “Simon, I have something to tell you.” and proceeded to tell a story to illustrate his point. He then turned towards me and said, “Simon, do you see this woman? When I entered your house you didn’t greet me with a kiss, or bathe my feet, or anoint my head with oil. But this woman has not stopped kissing my feet and bathing them with perfume and her tears. Her many sins have been forgiven, and for that reason she has shown great love. Conversely the one who is forgiven little, loves little.” The words must have stung Simon, who no doubt saw himself as an upright, generous man. Jesus then turned, smiled at me and said, “Your sins are forgiven. Your faith has saved you: go in peace.”

I left the house lighter and freer than I had ever been in my life.

I can’t say things were easy from then on. I had lost my income and my reputation preceded me wherever I went. However I found friends among Jesus’ followers who had also experienced his love and forgiveness, and they sustained me until I could make some sort of living an get back on my feet. I also had to learn how to love after so many years in the wilderness, and that took some time. Eventually I felt the need to go back to my old childhood haunts, the alleyways and slums, to seek out children who were lost and abandoned as I had been. I, and others in the Jesus group, began to take them into the safety of our homes and offer them the love and guidance I had never been given. I also talked to the women who, like me, were forced into making their living on the streets, pointing them to the one who made my new life possible. The task was immense, but the love Jesus had taught me had to overflow, and not just be kept to myself.

As I said, my reputation preceded me, but it gave me credibility on the streets among those with whom I worked. Besides, whatever people were saying about me meant nothing. None of it could dent my joy in my new found freedom. I would sometimes see Simon in the market place or one of the streets, and longed to tell him about the changes in me made possible by the ‘prophet’ he had disparaged, but if he saw me he would hurry past, eyes firmly fixed on the path in front of him. Was it guilt or an effort to avoid lust? I never really knew. All I knew was that I was at last alive, and not just surviving, thanks to an itinerant Rabbi who dared see me as something more than a prostitute, and feed my hunger for love.

And for that I shall be ever grateful.