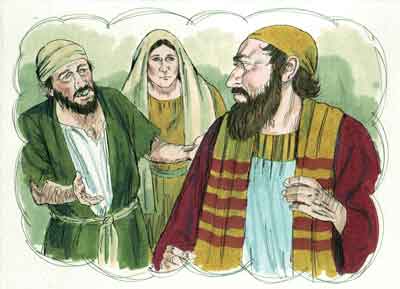 However it took some time. I almost lost heart when after that, their father took over their lives. Oh, don’t get me wrong, Zebedee is a kind man. But the family business comes first. So while other boys were soaking up the teaching at Yeshiva, James and John were falling asleep at their lessons. What do you expect, when more often than not they were out all night fishing? So while I had dreams of them having the honour of sitting at the feet of a prominent Rabbi for the rest of their lives, it was not to be. When they were 17 or so, Rabbi Jacob told them gently to go, earn their living in their father’s business, marry and have sons of their own. So while I was disappointed, they went off to do what they knew best, and, if the truth be told, loved doing the most.

But then a miracle happened.

One day a young Rabbi turned up at the sea shore followed by a crowd. The boys and their father, along with Simon and Andrew, were mending their nets after an unsuccessful nights fishing. The Rabbi asked if he could sit in the bow of one of the boats just off shore to talk to the people. That way his voice would carry. I don’t know what he said – I wasn’t there – but whatever it was, all four of them were hooked, especially after he told them to push the boat out and go fishing. They protested, saying that the fish weren’t biting, but gave in just the same, and brought the boat back loaded with fish. Then this Rabbi – Jesus was his name – told them that if the followed him, they would become fishers of people! Like I said, the boys were hooked, dropped everything, and did as he said. Zebedee, far from protesting, was so impressed with the miraculous haul of fish that he happily waved them goodbye. Then he came home and told me what had happened.

To say I was proud was an understatement! I couldn’t wait to tell all the women in the village the news, especially those whose sons had already graduated Yeshiva. In the three or so years that followed I soaked up all the stories the boys told me of their travels with this Jesus when they came home from time to time; all the parables and teachings and – Oi Vay! – the miracles. Such miracles! There were healings and turning a few loaves and fishes into a banquet for five thousand people and walking on water… In fact, as time went on, it became clear to one and all that this Jesus was the Messiah all Israel had been waiting for, although he himself didn’t brag about it.

The Messiah! And my boys were at the centre of all the action! My heart swelled until I thought it would burst!

And that was when I had this idea.

I would go to this Jesus and ask him a favour, something my sons would never dare do. They had been with him long enough to imbibe some of his humility. If I had listened more carefully to the stories my sons told I might have understood. But at the time?……at the time I was doing what any good Jewish mama would do – promoting my sons’ reputations.

My first job was to convince James and John of my intentions. It took some persuading, but when the opportunity came, they were with me. I found the group as they were on their way to Jerusalem. Jesus was telling his disciples something. I wasn’t really listening. It was of no consequence to me. I had a job to do. I took my sons and knelt at this feet, and asked my favour.

“Grant that one of these two sons of mine may sit at your right and the other at your left in
your kingdom.”

He looked intently at James and John. “You don’t know what you are asking,” Jesus said to them. “Can you drink the cup I am going to drink?”

Jesus then said, “You will indeed drink from my cup. But I do not have the power to grant your request to sit at my right or left hand. My Father has prepared those places for whomever he chooses.”

It wasn’t the answer I wanted, but at least my lads had stood up for themselves and declared their allegiance openly, something that put them at odds with their fellow disciples.

It was then that Jesus called them all to him. “You’ve seen the way the secular rulers strut around, lording it over everyone. Well, if you want to become great in this group, you must become the servant of the others, and if you want to be first, you must become the least, like a slave. In the same way the Son of Man didn’t come to be served, but to serve, and to give his life to ransom many.”

Oh, why hadn’t I paid attention to what he had said earlier? In fact it wasn’t until much later that it all came back to me, after those terrible events – things he had warned the group about, my sons included.

And these had been his words: “We are going up to Jerusalem, and the Son of Man will be delivered over to the chief priests and the teachers of the law. They will condemn him to death and will hand him over to the Gentiles to be mocked and flogged and crucified. On the third day he will be raised to life!”

So that was the ‘cup’ my boys had to share in. If I had known, I might not have been so pushy. And I should have known, should have listened. But I am, after all, a good Jewish mama, and would
probably do the same all over again, given the chance.

It’s been several years since those events. After Jesus’ resurrection and the growth of his followers, both in numbers and stature, James became the leader of the church in Jerusalem where it all happened. He did indeed drink from the same cup as Jesus, having been put to the sword for his preaching. John survived, and in his travels preached the life-changing good news of this remarkable Jesus.

So it might not have worked out the way I wanted, and I certainly grieved for James, but you know, I couldn’t be more proud of my sons – as any Jewish mama would be.