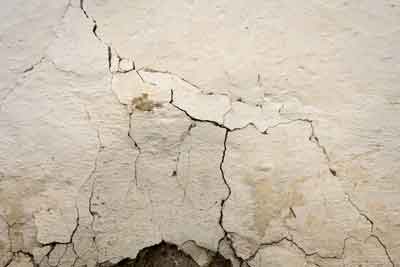 My place was a mess. The foundations were crumbling, the walls were cracking and the rafters were creaking fit to splinter. On stormy nights I’d lay wake up wondering if it would still be here in the morning. The thought of the extent of the damage overwhelmed me, and I felt powerless to even begin to fix it. My church prayer group wouldn’t come here (we met weekly in each other’s houses) unless, they said, I applied my faith to clean it up. I was grateful when they pointed me to a big bucket of faith (much like whitewash) I didn’t know I possessed and a very large brush and sent me home to apply it, which I did. Some of them even came around to help, hardly suppressing their disgust at the state of the place, but no doubt feeling it was their Christian duty to do so.

And they were right. My house looked good, squeaky clean – for a while. Then the cracks began toshow through again, and things were back to the way they were before. At which point out would come another bucket of whitewash and the process would be repeated……again…..and again.

And after the second coat I found I was on my own.

It was while I was applying what must have been the tenth or eleventh coat that I began to feel depressed. I mean, what was the use? After a while the cracks would appear again and I’d be back to square one. I knew that if I didn’t keep applying this whitewash of faith I wouldn’t be welcome in the group. After all, nobody could give me more faith – the faith I was fast running out of – and faith was the ultimate criteria for getting Jesus to come into your life and stay there. While I had experienced his presence, it was only when my walls were pristine white. Or perhaps those were the only times I would invite him in, when things looked good. But I didn’t think I had the stamina to keep them that way. No more whitewash, no more visits from Jesus. Let’s face it, if my own church group didn’t want to be here, why would he?

For days I sat staring at the beautiful white walls and what should have been a triumph. But I felt anything but triumphant. I had conquered nothing, overcome nothing. I prayed and prayed, offering my faith to Jesus, but seemingly getting nowhere. I turned to the scriptures, not really knowing what to read, but found myself in the Matthew’s gospel, at a place which I had probably skipped over many times before. After all, it began with, “Woe to you scribes and pharisees, hypocrites!” But this time I read on. Jesus was saying, “…you are like whitewashed tombs, which on the outside look beautiful, but they are full of the bones of the dead……” Oh help! That’s what this place felt like, for all it’s clean looks – a dead place. I felt no spark of life in me, only darkness.

After a while I was aware of a knock at the door. I hastily dried my eyes and went to answer it, and was amazed to find Jesus at the door, carrying a very large bag.

I was stunned! I managed to stammer, “Yes…yes…of course.” I was secretly relieved that at least the whitewash was in place.

“I put all my faith in your coming,” I said. But my confidence waned, and I said, with less enthusiasm, “but it never seemed to be enough.”

“What faith did you have faith in?” he asked.

“Well, was it faith in your faith, or faith in my faith?”

“Look,” he said, “your faith is wonderful for a while, and I do appreciate it. But you need more. You need my faith as well.”

“Your faith in what?” I asked.

“In me!!? What can I give you except this….this run down broken place? And I lied when I said I had faith in your coming here. I couldn’t even imagine you setting foot in here, except when I’d painted over the cracks, and…..and….” I realised how lame I sounded and, to my shame, began to cry again.

“Didn’t I tell you I have this secret passion?” he said with a grin. “I just love to come into what estate agents call ‘a handyman’s delight’ and transform it. So let’s make a start.”

At that he began to rummage through his bag. I expected him to bring out tools – a hammer, a chisel, or a trowel – but instead he lifted out a large palette, and tipped lots of tubes of paint out, along with artist’s brushes onto the floor. He looked around and said, “You’ve done well! This whitewash will make a wonderful blank canvas.”

I wanted to say, “Hey! You can’t just paint over my lovely clean wall…..!” but stopped before the words were out of my mouth. This was a time to trust him.

I watched as he squeezed the paints onto the palette; rich reds and bright yellows and oranges, prime colours and pastels. And then he began to paint, humming a little tune as he did. He painted trees and flowers and grass, animals, birds and fish, sea and sky, storm clouds and rocks, and, of course, a large rainbow – in fact a wonderful scene of creation. Sometimes he would say, “No. I think we need the tree there.” or “The whale should go here. What do you you think?” And I would agree.

When he’d finished, he stood back and said, “That does look good, doesn’t it.”

My drab little house had been transformed into a riot of colour. It was no longer a place for the dead, but for the living. It wasn’t just a picture of creation – it was a work of re-creation, and I loved it.

His visits became regular. Sometimes I helped him touch up the picture, sometimes we simply chatted. When a crack reappeared, he would skilfully turn it into the branch of a tree or the stem of a flower. And I noticed the hole in the wall where I had once tried to hang a picture had become the hollow of a tree trunk.

Also, something interesting happened. As I lived in this cheery environment, I found myself growing strong enough to want to fix things up. He courteously waited until I was ready, then brought his bag along – this time filled with tools – to lend a hand.

I invited my church group in to see my new-look house. Some were amazed, some scandalised. After all, the walls should have been pure white before Jesus would deign to enter! But I didn’t mind. I now knew that Jesus was happy to come into my very worst situations, and I loved him for it.

And one day I noticed something I hadn’t seen before. Low down on one of the walls there was a small painting of myself – unmistakably me – sitting, leaning against a tree trunk, hands behind my head, resting and soaking up the sun. And then I knew for certain that I was an intimate part of this re-creation. ! 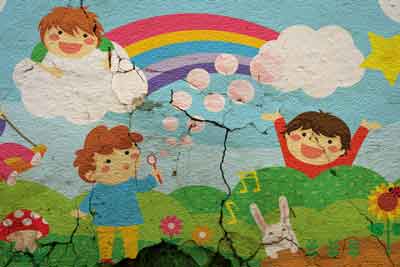