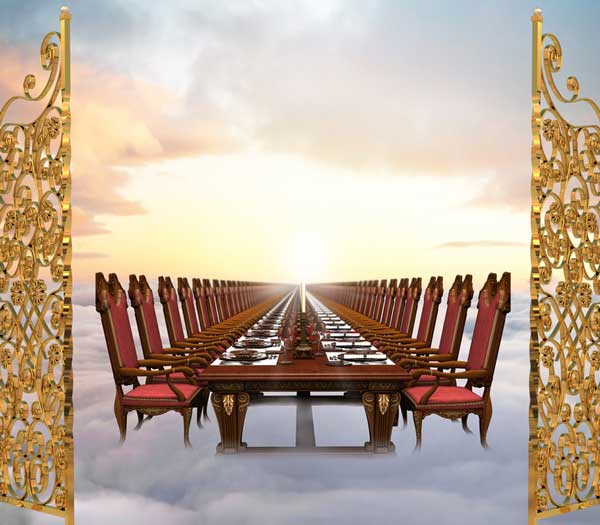 I approached the venue, together with lots of other people, carrying my invitation and two suitcases. When I say ‘with’ others, I mean that we were all going in the same direction, not that we were ‘together’,
if you catch my drift.

The cases were heavy, and I had been carrying them for what
seemed a lifetime. I put them down and sat on them to catch my breath and survey the scene.

The banqueting hall was ahead of me, complete with and angel at the door, who must have been at least three meters tall. “That’s nice,” I thought, “a welcomer.” People were passing me and going to the angel. Some, having shown their invitation, were ushered in. Some didn’t even offer an invitation. Nevertheless the angel welcomed them, even bending low to give some of them a kiss on the cheek. Some even sauntered up and gave the angel a high-five, and I could hear them laughing, as though they shared some private joke. All of these were admitted with no fuss. Each time the door opened I could hear more laughter and smell the enticing aroma of food.

Some, like me, carried baggage of some sort. These were all turned away. Several went back the way they had come. A few, after some hesitation, went over to a pile of baggage that I hadn’t noticed before, just
around the corner from the door, tossed their stuff onto the pile and returned to the angel, who smiled and opened the door for them.

It took me some time to realise that not one person who was admitted carried any baggage – no suitcase, no back pack, no handbag. Not even a purse.

I revised my assessment of the angel. This was no welcomer. This was a bouncer!

As I watched, a couple of dark, shadowy figures crept over to the pile of suitcases and backpacks and started to rifle through them, making off with whatever they could carry. “Not my stuff!” I thought. “No way will they get their hands on my stuff!”

It was time to front up to the ‘celestial bouncer.’ I plunked my suitcases down on the step, proffered my invitation and waited to be welcomed in. 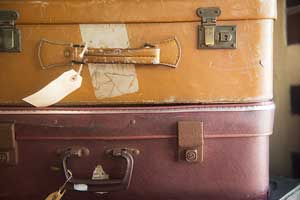 “I’m sorry,” he/she said, “You can’t bring your baggage in. You can leave it around the corner with the rest if you like.”

“What! All my treasures!? My reputation as a life-long Churchgoer, serving on councils and committees, organising fetes to raise money for the roof, dishing out food in our soup kitchen for those less fortunate? You want me just to toss them onto that pile?! You have got to be kidding!”

The angel simply looked at me with something what seemed to be stern pity (if there is such a thing).

“What rule says that I can’t part with my luggage?!” I asked angrily.

“The rule of love.” said the angel.

“What in heaven’s name has love got to do with banning me from the banquet!?”

“Well,” said the angel. “first of all, if you take your suitcases into the hall, you’ll spend all your time worrying about where you put them, or whether they will get stolen. That will definitely spoil your appetite. Secondly, they’ll be in the way. Someone could trip over them, like the children who play under and between the tables, and you wouldn’t want to be the cause of an accident, would you? A case of ‘Occupational Health and Safety’, you might say. Thirdly, and most importantly, you won’t need
them in there. The banquet is free. Nothing you have is necessary or adequate for the cost of admission, because there is no cost.”

It all made sense, but I wasn’t finished yet.

“I have a right to be here, I have an invitation!” I said hotly.

“What about all those people who just sauntered in without so much as a coupon. You let them in!”

“Not all invitations are formal.” said the angel.

The heat rose to my face. “You can’t seriously expect me to just dump my stuff on that pile, to be pinched by those……those scavengers, do you?!”

The angel sighed a sad sigh. “Those are the hungry outcasts, who have either not heard about the banquet because nobody has told them, or if they have been told, can’t believe it’s for them. They rob and steal
because they think it’s the only way to satisfy their hunger and thirst.”

I had no answer to this. I needed to think.

“Would you mind going over there while you decide what to do? There are others waiting.” and the angel gently moved me to the side.

I did as I was told and sat on my heavy suitcases for a long time, fuming.

Darn it! I deserve to be admitted! I have an invitation, and I’ve accepted. Isn’t that enough? And what about my credentials, carefully packed away in my suitcases? Haven’t I behaved diligently over the years, working for the Lord? I mean, I despise those who claim to be Christian and don’t even try to contribute to the cause.

It all seemed to mean nothing to our bouncer friend.

Once I’d cooled off a bit, I realised I had to make a choice. Do I dump my suitcases and be welcomed in, or do I take my treasures home, where I know they’ll be safe? After all, they did weigh a ton, and I didn’t
fancy lugging them all the way back. The choice was mine, and it slowly dawned on me that whatever I plumped for, it would be the most important decision of my life.

I wondered what that life would be like if I refused the conditions of entry and turned my back on it all, after having caught a glimpse (and a whiff) of what was on offer. !