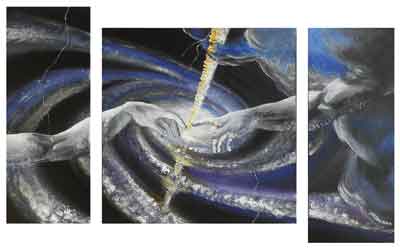 It was the isolation that was the worst thing. Or should I say, the lack of physical contact. No embracing, no kiss of peace, no tender touch of a husband – all gone. And all because I was bleeding. Oh, not the normal monthly show, but slow and persistent, resisting any cure or remedy, but enough to cut me off for years from all that I loved.

Even as a child I loved the Sabbath and the services at the Synagogue. I loved the high festivals when we would go to the temple in Jerusalem. I loved the colour and pageantry, and most of all, I loved the Yahweh who came alive in the reading of the Torah. I loved the law, given by Yahweh to guide us, and lived by it as best I could, even if it was inconvenient.

But this was beyond inconvenient.

This meant that I could no longer attend Synagogue. This meant that Rabbi Levi (Levi, with whom I had played when we were children!) would cross to the other side of the road if he saw me. This meant that the local women would whisper behind their hands as I passed by on my way to market. This meant that my husband, who couldn’t have marital relations with me because I was ‘unclean’, tired of me and left for another woman, compounding my shame and disgrace.

I wept many bitter tears as I pleaded with Yahweh show me how to endure this isolation with grace – after all, the law was the law, and I had to abide by it. Since he gave it to us, I must bow to his wishes. But try as I might, I felt my life seeping from me along with my blood, and grieved for my loss.

Sometimes, in desperation, I would go into the town when I knew it would be full of people from other places, and join the crowds. I would be jostled and bumped along, and although the touching wasn’t exactly tender, at least I felt as though I was no longer alone, and could pretend to be normal. However, this wouldn’t last long, because somebody would invariably recognise me (even though I took the precaution of veiling my face) and drive me back to my empty home and my weeping before Yahweh. Oh how I hungered for some sign of his love for me, a child of Abraham. The law might be the law, but it couldn’t stop the yearning, or the tears.

It was on one of these forays into town that I found myself being swept up in a crowd that was moving out into the countryside. We stopped before a rocky outcrop, where a young Rabbi was sitting.

He began to speak. “Blessed are the poor, for theirs is the kingdom of heaven.”

There followed a litany of similar sayings, but the one that exploded in my mind was, “Blessed are those who are persecuted for righteousness’ sake, for theirs is is the kingdom of heaven.”

Was this me? Was I being ‘persecuted’ so that others could maintain their facade of righteousness? Then I remembered a neighbour of mine who was brought before the Sanhedrin because she was found with another man, who was not her husband. She pleaded that she had been forced to lie with him, and raped, but that didn’t stop her from being stoned to death. I also
remembered how I thought at the time that she deserved it. After all, the law is the law. I wasn’t sorry for her at all. But now that I had experienced the cutting edge of that law, I wept with shame at my lack of compassion.

He couldn’t have been much older than 30, but this Rabbi preached and taught with an authority that was well beyond his years, and not like any Rabbi I had experienced at my Synagogue services. When he had finished speaking, the crowd dispersed, and he and his disciples moved off towards another town. I longed to follow them, but since the crowd was thinning and my cover was disappearing I had to hurry back home.

But that wasn’t the end of it. One day I saw the Rabbi and his group walking ahead of me on the road out of town. As one who was ‘unclean’, I knew my place, and I followed them at a discrete distance. The road led past a leper colony, and as they drew near, a man from the colony ran towards the Rabbi and threw himself on the ground before him. I couldn’t hear what was being said, but what I saw changed my life forever. The Rabbi reached down, took the leper’s hand, and helped him up. He actually touched the man! This was unheard of! I wanted to run to him and plead with him like the leper, but I stood rooted to the spot, staring in amazement. The group moved on, and I went home and paced the floor, trying to digest what I had just witnessed. I knew I had to get close to this Rabbi somehow, so I decided to risk going into the town more frequently in the hope of seeing him.

My persistence paid off. One day I again found myself swept up in a crowd and became caught up in the excitement. It seemed that somewhere ahead of me were the young Rabbi and his disciples. I was determined to get to him. I fought my way through the crowd until I was right there behind him.

Then my confidence failed me.

Who did I think I was? After all, I was unclean and worthy only to be shunned. Would he reject me like my husband and friends? Then I reasoned that if I could touch him, or at least his cloak or robe, even if he didn’t touch me, perhaps that would be enough. I hesitated, but then reached forward and took hold of the fringe of his prayer shawl. After all, I had nothing to lose. To my horror, he stopped and turned. “Who touched me?” he asked. “How can you ask such a question?” said one of his disciples. “The crowd is pressing in on you. It’s all we can do to protect you from being mobbed!”

I could not hold back. I fell to my knees and confessed that it was me. And then he did what I had been craving for so long. He touched me on the shoulder, took my hand and helped me to my feet.

“Child of Abraham,” he said, “your faith against all odds has made you whole. Go in peace.”

And then he kissed me on the cheek and whispered, “Shalom.” in my ear.

As he turned to move on, the crowd surged around me. But all I could do was stand and weep with joy. I could feel the change in my body, and I knew I was healed. As soon as I could I went to a physician who verified my healing, and gave me a certificate to take to my local Synagogue. I danced my way there and gave the parchment to Levi, who read it, and said, without even looking at me, “We’ll expect you here on the Sabbath.”

I wanted to shout at him, “Look at me! I’ve been healed!! I’m telling you the young Rabbi healed me, and all you can say is, ‘Be here next week.’?! What’s the matter with you?” But I think that bit of parchment meant more to him than me or my healing, because it complied with the rules and regulations.

So now I’m back at Synagogue, and when I hear the law being read, I think, “All well and good. But the law isn’t compassionate. The law can’t touch and heal. Only Yahweh can do that. And does. Just ask the young Rabbi who healed me.”

I’m not there every Sabbath of course, because I’m often with him and his friends. You see, I’ve begun to travel with his group and help, with the other women, to supply them with food and hospitality. There have been wonderful evenings when I have hosted a meal in my house. The conversation has been lively, witty, funny and thought provoking, and I have been blessed by their company and continually give thanks to Yahweh for it, because I have experienced its souldestroying
absence.

I tell as many people as possible about my healing – after all, it’s such an amazing story. Some of them rejoice with me, some of them are sceptical, and some of them are downright hostile. Like the woman who thought I was mad, and said to me, “You must be touched!” I laughed and said, “That’s exactly right.”