It started quite a while ago, this periodic knocking. It wasn’t loud, so I was able to ignore it for quite a while. But it was annoyingly persistent, and eventually it began to bother me, so I thought I’d better trace its source.

It seemed to be coming from the back room – you know, one of those places you store all the stuff you don’t use any more, so that you end up with a room you never go into because it’s standing room only. There’s a big, old wooden door at the back, that leads to the outside of the house. I never use it, partly because it’s padlocked (on the inside) and the key has been lost, and partly because (if I remember rightly) there’s a large dresser pushed up against it.

Being a very rational person, I looked for a logical reason for this knocking. The first thing I thought of was deathwatch beetle, so I googled wikipedia.

The adult beetle is 7 millimetres (0.28 in) long, while the xylophagous larvae are up to 11 mm (0.43 in) long. To attract mates, these woodborers create a tapping or ticking sound that can be heard in the rafters of old buildings on quiet summer nights. They are therefore associated with quiet, sleepless nights and are named for the vigil (watch) kept beside the dying or dead, and by extension the superstitious have seen the deathwatch beetle as an omen of impending death.’

Not very cheerful, I thought.

Since wikipedia didn’t offer any advice on fumigation, I resolved to put up with it, but that was more easily said than done. The wikipedia definition of ‘quiet, sleepless nights’ became ‘noisy restless nights’, in which the knocking invaded my subconscious, which did nothing to improve my temperament. So I went to the doctor for some sort of a fix. He prescribed valium. So my nights were taken care of, even if I had a bit of a hangover the next day, but at least I got some respite from the noise.

But that didn’t take care of my waking hours.

Now, I work and play hard, so I spend a lot of time out of the house. I found myself working longer hours at the office, and more time at my favourite watering hole, but the knocking was still there when I got home. 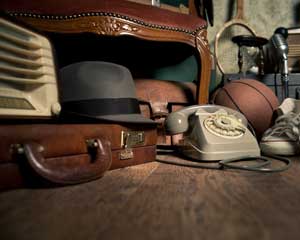 I needed some therapy – a good dose of retail therapy. That should do the trick. So I went shopping. I bought a lot of stuff I didn’t really need, but it made me feel good, so I returned home invigorated and strengthened for the next round……but that didn’t last long. For one thing, I realised I had to move some things into the back room to make room for the new stuff I’d bought, and that filled me with dread.

I began to wonder if the knocking was in my head, and that really scared me, so I resorted to another kind of therapy. I went to a psychiatrist. After a few expensive sessions, and rubber band around my wrist to twang when I felt stressed, I thought I could do battle with the dastardly noise. But this was not to be. The rubber band snapped and the knocking continued.

One of the things both my doctor and psychiatrist had recommended was that I go on a long holiday, perhaps a cruise. So I did just that. Three weeks away on an all-expenses-paid-first-class-Pacific-cruise-including-luxury-cabin-with-balcony-and-oceanview.

But as one who gets sick watching a gold fish in a bowl, I spent an awful lot of time in my luxury cabin and practically no time sunbathing on the balcony. So I returned to the knocking in the same condition as I had left.

I began weeping on the shoulders of my friends, who really weren’t very helpful. One of them, a daft woman who was into churchy stuff, even suggested that I actually open the door and find out who was on the other side. ‘Are you mad?’ I said. ‘My house has a perfectly good front door, with a perfectly good bell that chimes ‘Ode to Joy’ to ring. Who would want to keep banging on a door that’s overgrown with vines and weeds’…(did I mention that) … ’on the outside and padlocked on the inside? Besides, if you’d seen the state of that room, you’d understand why I don’t want to go in there.’

So it seems that I’m stuck. I’ve run out of rubber bands, I’m addicted to valium, and retail therapy is out of the question, because I spent all my money on psychiatrists and useless cruises. I can’t simply keep leave home, but staying at home means enduring the noise. I have to do something about it.

Maybe I could buy some bolt cutters………….?