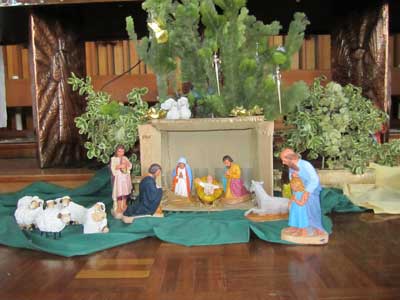 I have always felt that Christmas was for children, and did myself proud every year with decorations and trimmings and lights, and lots of presents around the tree, so that my children (and lately, theirs) would have a wonderful, glittering day. We would get church over and done with in the morning and rush home to put the roast on and lay the table, so that the real festivities could begin. Jesus, for me, was to be cosseted, and only ever offered the best. And Christmas was just the opportunity to do that. After all, he was once a child, wasn’t he?

That was until this last Christmas.

Neither of our children and their families could, for reasons of their own, be with us. Emma was rostered on at the hospital on Christmas Day, and Robert’s mother in law was ill and really needed her daughter to be with her. Consequently, Christmas morning found my husband and I sitting in the back pew at church with no excuse to rush off after the service. As the carols were sung and the service progressed, I grew more and more resentful. All this beauty and joy, and my Christmas ruined. It just wasn’t fair. I was quietly simmering away when our priest called the children to the front for the sermon. It was only then that I noticed that the nativity scene was missing. There was a large tarpaulin spread in front of the altar with a couple of hessian bags and a cardboard box, but that was all. My curiosity was aroused, and I began to take notice.

His sermon went a bit like this:
“OK kids, we’re going to make our own nativity scene today. Now each of you has one of  the animals or characters to go into that scene, but first, who knows where Jesus was born?”

A little hand shot up. “In a stable!”
“That’s right, in a stable. And what do you think we’ll find in a stable?”

Several answers were forthcoming, mainly various animals, and then, “Straw?”

“Yes! So we’d better get some straw. I’ve got some here.” He then scattered some straw from one of the bags onto the tarpaulin.

“Yes. But what do animals do in a stable?”

“They eat the straw.” came one eight year old’s reply.

“And what happens after they eat the straw?”

This question was perplexing. Eventually one four year old boy giggled and shouted, “They pooh!” And everyone laughed.

“You’re absolutely right! And I’ve got some here.” He proceeded to take some dried sheep dung from the other bag and scatter it onto the straw, while the children giggled with glee. “The stable really was a smelly place, wasn’t it?”

“Now I think we’re ready for the people and the animals.” As he called each one – Mary, Joseph, shepherd, lamb, etc – a child came forward and place the figure in the ‘stable’. Baby Jesus was left until last.

But there was a problem. There was no pristine little manger to put him in. “Oh dear. It’s just like that night, when there was nowhere to put the baby to sleep. They had to find whatever was at hand. I tell you what, just like Mary and Joseph, I’ve got something here that will do. It’s a bit tatty, but so was the manger they used. Here it is.” He reached for the cardboard box that had definitely seen better days. It had been wet at some stage, and dried into a wobbly shape, and on its side was stamped, ‘Woolworths tomato sauce’ – upside down, so that some children tried to stand on their heads to read it.

“We’d better put some straw in the box so that the baby will be warm, don’t you think?” This he did, and a little girl then came forward and solemnly placed the baby Jesus into his little bed.

“There! Perfect! This is a good time to sing our next carol, ‘Silent Night.’”

As we sang the carol I was thinking, ‘Yes, it is perfect. But why?’ It cut across all my ideas of Christmas with all the trimmings. It was an affront to my dedication to perfection. And yet there it was, the real deal.

It was then that I realised that my resentment ran a lot deeper that missing my family. It went all the way back to my own childhood. Memories of poverty, and a father who was drunk more often than not, and angry with it. Of hand made toys instead of real dolls, and a branch off the backyard gum tree instead of a real Christmas tree, and decorated with paper chains we had made and bits of tinsel from the occasional lollies (a great treat for us) that we had saved up during the year. And here I was, still a disappointed, resentful child, standing in my own poohy stable that I had hidden from myself and never offered to this Christ Child as a place where he could lay his head. Instead I had substituted superficial tinsel and fairy lights that I thought would please him more, but was actually only pleasing to myself.

I then began to think about my father and his drinking, this time through the eyes of an adult. He was a returned serviceman, and had seen heaven knows what horrors during the war. Was my addiction to glitz and glamour any different to his addiction to alcohol? Both had the effect of dulling our pain. I also began to remember good things – the wooden toy trains he made for my brothers, and the teddy bear my mother must have spent hours making for me – and I felt ashamed. It was then that I resolved to be more open to this new message of Christmas, and to the Christ who needed me to give him a home in the darkest recesses of my heart, not just the places I thought were acceptable.

This began a time of reflection. We went home from church more slowly than usual, having taken time to chat to the other people there before leaving. We exchanged presents while our traditional roast dinner was cooking (albeit much smaller, with only two to feed) and spent a quiet afternoon, my husband dozing, and me thinking deeply about that children’s sermon. I thought about the Christmas celebrations of my childhood. After a while I found Jesus standing beside me, examining my teddy bear and the boy’s wooden toys, the decorations I thought were tawdry and the other trappings, and grinning with pleasure. And I realised that he had made his home there, and everything was changed. Somehow this Light of the world had shone in my poohy stable and showed me something I had never seen before – how beautiful it was. Perfect, in fact.
The Real Life – A Christmas Poem