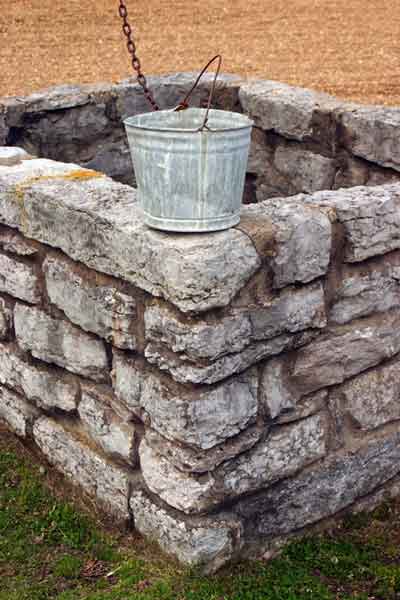 You might think it odd that I go to draw water from the well around noon, in the hottest part of the day. If I had the choice, it would be in the coolness of early morning, but that’s when all the other village women come, and that’s when I’m not welcome.

You see, according to the strict customs of our people, I’m a pariah. I’ve had five husbands, and the man I’m living with right now – well, we’ve never tied the knot. All the other women have their lives in nice tidy order, having dutifully given their husband children and been honoured for it (mostly). On the other hand, I’ve had to take whatever I can get. It didn’t start that way, mind you. My father married me off at 14 to a man of his choice. He was well off, reasonably good looking, and I, in my naivety, thought he loved me. And he did, in his own way. But when children weren’t forthcoming, he eventually divorced me for a younger, more fertile (as it turned out) girl.

I went back to my father, who was none too pleased. In fact he let me know in no uncertain terms that it was my fault that I was childless (it’s always the woman, so I discovered), and so turned me out. My mother would have defended me, but she had died several years before. So I found myself on the streets, with no male relative to protect me. Needless to say I latched onto the first man who looked in my direction, ending up with a roof over my head all right, but being used for his pleasure until he tired of me. Then I moved on to the next, and to the next, and so it went on. I had given up yearning for love a long time ago. I had become hard and cynical.

So you can see why I wasn’t the flavour of the month with the other women of the village. They were quite sure I would set my sights on one of their husbands.

And that’s why I was at the well that particularly hot day, drawing water and cursing the turns in my life that brought me there. 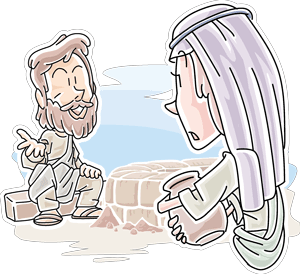 But this time it was different. There was a young man sitting on the low wall by the well. I could tell from his prayer shawl that he was a Jew and a Rabbi, so I was startled when he spoke to
me. As a Samaritan and a woman, his talking to me was definitely socially unacceptable. But there he was, asking me (and there was kindness in his voice) if I would draw a little water for him to drink. I must have stared at him for some time, unable to believe what I was hearing.

Eventually I said, “How come you, a Jew, are asking me, a Samaritan woman, for a drink?”

My words dripped cynicism. He didn’t seemed to notice, but smiled and went on: “Ah, if you knew who I was, you would be asking me for a drink, and I would give you fresh, living
water.”

“Come on!” I said. “You haven’t even got a bucket, and the well is deep. So how do you figure you can get this ‘living water’ you’re on about? Do you think you’re better than Jacob who dug this well for our ancestors, so that we can use it even today?” By now I was layering the cynicism on thick.

The young man (still smiling, to my amazement) said, “You come to this well day after day, and the water in your jar runs out day after day. The water I’m talking about will never dry up. It will be a constant spring within you.”

My mind went into overdrive. Fancy not having to trudge our here every day in the heat of the noon day sun! I was practically drooling at the thought.

No use being cynical now. I needed to plead. “Oh, if only you would give me this water so I don’t ever have to come out to this well again.”

Then he put the cat among the pigeons. He said, “Go and call your husband, and then come back here.”

My heart sank. Back to square one, I thought. He’ll be just like the others, judging me and looking down his nose at me. There goes my never ending supply of water. Playing it safe I told a little white lie. “Sir,” I said, “I have no husband.” That just might do the trick, I thought.

But he saw straight through me. “That’s right,” he said, “you’ve had five husbands, and the man you’re living with now isn’t your husband at all.”

“So you think you’re a prophet, do you?” I said. “Well here’s a conundrum for you – we Samaritans have worshiped on this mountain for generations, but you Jews insist that Jerusalem is the only place to worship God. So where does that leave me? You’ll just go off back to Jerusalem and worship God, while I and others like me will be left to feel your self righteous arrogance. So don’t give me that guff about ‘living water.’ It only flows in Jerusalem as far as you’re concerned.”

His reply was stern, but without anger “Listen to me. The time is coming – in fact it’s already here – when it won’t matter where we worship. And that’s because God is the essence of life itself, pure Spirit. That means that God is bigger than this mountain or Jerusalem or any place. He calls us wherever we are to worship him, and it doesn’t matter who we are either, so long as we worship him with every fibre of our being, offering our true selves in adoration.”

This was a lot for me to take in, and my brain became a bit fuzzy. I had to think, so I shelved my anger. Then I latched onto something that I had been taught a long time ago.

“I don’t know about all of that,” I said, “but I do know that the Messiah is coming, and when he does, he’ll make it all clear to us.” 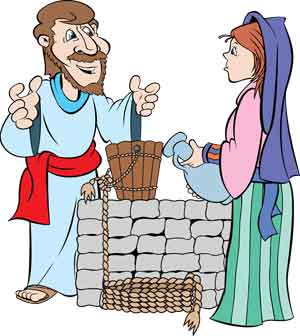 And then he said quietly, “I am he. You don’t have to look any further.” I was stunned! My mind reeled for some time, but suddenly it all made sense to me. He had made it clear, but it didn’t have anything to do with this wretched well – that was only a metaphor. It had to do with what was already within me – my craving for love and a better life, a thirst that could not be satisfied by my partner or the women in the village. And here was this remarkable man who seemed to know me inside out. Surely if anyone was going to give me this living water that would quench my raging thirst, he would. He didn’t condemn me. He broke all society’s rules and traditions to simply receive me as I was, without censure, and offer me a cure for my wretchedness.

While I was chewing all this over, the man’s disciples came back. The look on their faces was priceless. They were horrified, for all the social reasons I went into before. While they
remonstrated with him, he – believe it or not – smiled and winked at me. I had to laugh. And I knew I had to share what I had just experienced. I didn’t care what people thought of me. I left my jar there and then and ran to the market shouting, “Come an see this man I just met! He knew everything about me, and he didn’t care! Could he be the Messiah?” I
must admit I got some strange looks, but quite a number of people did go out to the well to see for themselves.

Since then life has become better for me. I’ve found friends in those who went to the man at the well and, like me, came away changed.

And believe it or not, one of them was my partner, who has just asked me to marry him!

It seems that the living water just keeps on flowing.